There’s so little I know about Mark West. He was an undersized (6’10”) starting center on a series of competitive Suns teams. He wore number 41 and was black with black moustache. He always shot well from the field (research shows he’s fourth all-time in career FG%). On first glance, without the benefit of seeing or knowing his height, he could’ve been anything, worked any job in any business or trade. Picture Mark West in a hard hat or a suit and tie and it’s the same; a trooper, a worker bee, a brick in the wall. This isn’t a slight on West by any means as the majority of us move through life as relative bricks in relative walls.

But Mark West was tall and while he may have been average by NBA standards, he had enough ability to stick for 17 seasons. Those Suns seasons when many of us probably remember him were spent in a supporting role to bigger and brighter stars and personalities like Kevin Johnson, Xavier McDaniel, Chuck Barkley, Dan Majerle, Jeff Hornacek and was even outshone by coach Paul Westphal. West also attended Old Dominion University and is profiled in a video below during his ODU days. A fair comparison in terms of present-day ability is a lesser version of Emeka Okafor – an undersized defensive center clearly attuned to his role within the team dynamic. 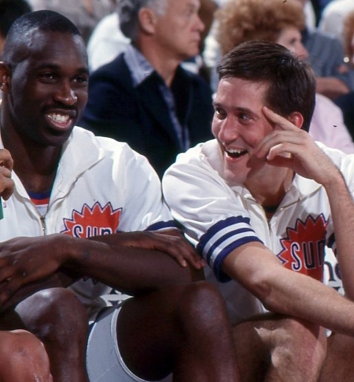