I’m not gonna lie. I didn’t dig into Ready to Die until after Life After Death had already been released. My hip hop journey started left and moved to the right, geographically passing over me in the process and so I was always catching up to the east coast. I was at the University of Iowa with a Case Logic book stuck full of CDs. Notorious was already dead, but when I threw on Ready to Die, it was like my Iowa City dorm room had been transformed into some grimy denizen in Brooklyn. 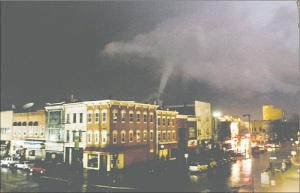 “Things Done Changed” is the introduction into the nightmares to come on Ready to Die, but here it’s a postscript for the Spurs. Biggie focused on the strapped youngsters changing the game, but he neglected to tell us about the old heads unable or unwilling to assimilate into the gun culture.  The Grizzlies, with all their scrappiness, Brooklynese griminess, Tony Allens and Sam Youngs are the stickup kids:

Yep, that’s what the fuck happens. From the Grizz bum rushing the Spurs in Memphis in game four to the Spurs sneaking by on a Gary Neal three in game five to the inevitability of Memphis stomping out the embers of hope in game six, the Spurs done changed. This isn’t anything new: teams age, superstars fade, Zbos come up and Ernie Johnson holds down the fort through it all. The incarnation of the Spurs that we know: the systematic offense (even you, Ginobili, with your behind the backs and violent head fakes, are systematic), constricting defense, the method, practiced and refined, perfectly improvised; this version is gone. It’s the same group of guys wearing the same jerseys and coming up with the same regular season results (61 wins and a number one seed in the west), but with different method.

The regular season is the key qualifier though. I always thought injuries and health would catch up with this iteration of the Spurs, but with the exception of Manu missing game one, the Spurs stayed as healthy as a team can after playing 80+ games and traveling across the United States for seven straight months. “Little motherfuckers with heat” may have pulled the final trigger, but they didn’t do the Spurs either.

Outside of San Antonio, the Spurs weren’t considered a strong option to win the title or even make the Finals. We know a fake when we see one and while you can’t fake your way to 61 wins in 82 games, you can fake being yourself. Time and circumstance forced Pop’s hand to come up with a new team out of old basketball players. And somehow he pulled it off with the second-most regular season wins in a 15-year career and the third-most in franchise history. The Spurs had slowly been trending toward this style over the past three or four years, but this season seemed more real and at times genuine because they were pulling it off so effectively. It’s almost harmonious for fans and analysts to see the Spurs in first place and be lulled into thinking they had returned for another voyage into the deep.

Then the playoffs started and the ruse was over. In terms of the Spurs postscript, the reverse-Biggie perspective, the Grizzlies have little to do with the Spurs’ aging wrinkles and saggy skin. If it wasn’t Memphis, it would’ve been Portland, Denver or OKC. Has a number one seed ever had so many poor potential matchups in the first round? The only two teams that matchup favorably for San Antonio are Dallas and New Orleans. This version of the Spurs relied on a magician’s bag of tricks: Manu’s leaning tow-on-the line two to keep hope alive in game five, his half-court shot in game six, his double behind-the-back dribbles—the same stuff he’s been doing for years. Only in the past, it was just one part of a larger ensemble. Manu went vintage in the 2011 playoffs, but it was a solo act. He stayed true to the game we’ve been watching for the past decade, but the rest of the club couldn’t keep up with his pace or rhythm. The Spurs fumbled In the fourth quarter of game six, dropping passes, miscommunicating on must-foul situations, were routinely beaten to loose balls and collapsed at the end with what felt like a sense of relief.

Change is inevitable, but doesn’t make it any less challenging or difficult to swallow. Today the future doesn’t matter in San Antonio any more than it does in Memphis. Both cities and fan-bases are stuck in the present for all the right reasons.