I was planning on writing a post about the angry radicalism of Kareem Abdul-Jabbar, but Bug and Hamilton convinced me to put it on hold and give Shaquille O’Neal his due so here I sit trying not to regurgitate all the post-Shaq sentiments I’ve soaked in.

In so many ways, this has been a season of change in the NBA. Beyond the obviousness of Pat Riley’s coup d’état in the summer of 2010 or the league’s youngest MVP ever, the playoffs have been a showcase for that cold hearted bitch named Time. Tim Duncan’s Spurs were womped by Memphis. Kobe, Phil and the Lakers were pistol whipped, bound, gagged and robbed of their three-peat opportunity by Dallas. The original Big Three of the 2000s, KG, Pierce and Ray Ray at least showed some heart in their demise at the hands of the new Big Three from South Beach. The proverbial torch wasn’t passed, at least not willingly. It was snatched from desperate, weaker hands. 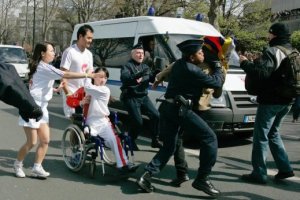 So it seems fitting that Shaquille O’Neal—who at 23 knocked MJ out of the playoffs, was sacrificed at the altar of big men by Hakeem, threw punches at Barkley, had a verb created in his name in acknowledgement of his backboard breaking prowess and so much more (got to think his auto-bio will be Presidentially heavy)—retired this season when the league’s undergoing tectonic changes.

Along with Jason Kidd, Shaq is the last of the early 90s leftovers. The difference is Kidd never defined or represented any period of time in the NBA; he was just subtly dope with his triple doubles and Simon Phoenix dye job. Shaq came into the league with a posse, he rapped with the Fu-Schnickens, and breathed charismatic existence into Neon Boudeaux. Even if it was partially because of his size (in the 2000s, “How much does Shaq really weigh?” was one of the biggest mysteries/rumors in the NBA—7’1”, 400lbs? no shit?), non-basketball fans recognized Shaq. He took the Jordan marketing blueprint and put a younger, more entrepreneurial mid-90s spin on it. And even if his shoes looked like plastic snow boots and his raps were corny on a good day, it still had promotional value and made the big man money—who the hell knows which motivated him more.

All these entertaining pit stops over the past 20 years and that doesn’t even touch on what he was doing between November and June. Where Hollywood Shaq ends and NBA Shaq begins is a blurry area definable in the early 90s when Shaq was filming Blue Chips. In his opening scene he’s playing in some kind of abandoned warehouse gym (that happens to have a backboard and breakaway rim) in the bayous of Louisiana. He’s more myth than man and that’s the point when everything is always beautiful, because man can rarely live up to the myth that precedes him (Obama?). But then we arrive in gym with Nick Nolte, serenaded by the deep blues and we see Shaq for the first time being the power center to tilt the NBA away from the finesse of Ewing and Olajuwon, the muscle to counter the speed and athleticism of the Admiral. For once the man exceeded the myth. Shaq was Neon was Shaq—in personality and basketball ability, onscreen and off.

When he joined the Magic in 1992, he didn’t fuck around with fear for a second. He dunked his way into the pulse of the sports world. If someone with Shaq’s size and ability would’ve shown up in the 24/7 Twitter/Facebook world we inhabit now, he would’ve eclipsed the Blake Griffin buzz the way Blake enveloped John Wall mania. Shaq dominated the center position in an era when the league was deep with quality at the position—Dream, Ewing, Admiral, Mutombo, Mourning. Any of those players would give Dwight Howard fits. In his second season, Shaq went ahead and put up 29 points and 13 rebounds a night. Before Shaq, Moses Malone was the last player who pulled off +29 and 13—that was back in 1982. No player has done it since; except Shaq for a second time in 2000.

For all the inexhaustible superlatives and monikers that have defined the man for the past 20 years, it feels divinely appropriate that he had a bright, shining, easily identifiable weakness in free throw shooting: The Hack-a-Shaq method. Can you believe this shit has its own Wikipedia page? Think about your biggest weakness at your job. Maybe it’s something you’re acutely aware of and while you have to confront it at times because someone’s paying you a salary; you’d prefer to avoid it. Maybe it’s running TPS reports or cleaning the handicap stall or handling customer complaints. Whatever it is, you’re not that good it. You’re actually below average. Now imagine that a competitor found out about your weakness and at the most critical time of year—annual review, boss observing you in action, in the middle of providing service to customers—your competitor attacks that weakness. Come playoff time or close games; that was Shaq’s reality. In retrospect, a man with that much of an advantage had to have an equally great weakness. For all the greatness, we’ll always remember his free throw line odyssies.

Now it’s all done. The most physically dominant player I’ve ever seen is retiring. In a league of giants, Shaq dwarfed them all. The men he battled with and against are gone or walking into the sunset—Iverson, Duncan, Sheed, Kobe, KG, Webber. For that, it’s appropriate that Shaq’s retirement symbolically closes the door on a generation he owned and helped define. Today, the league is a lesser place without him.

2 responses to “Gigged on Em”