The first post I ever wrote here was about the indefensible mugging the Spurs were receiving at the hands of a young, hungry, relentless Memphis Grizzlies team. After finishing the regular season with the West’s best record, the thousands of minutes and hundreds of games spanned over more than a decade worth of pro basketball had caught up with the great Tim Duncan and his associates. Now heading into another season at age 35, how should we feel about the present version of this all-time forward/center and the men who have flanked him in battle all these years? 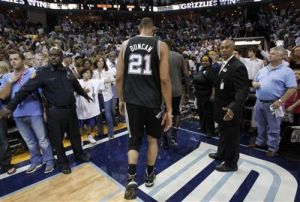 As a sport consuming culture, we’ve become accustomed to watching our heroes transition from immortality (21pts, 20rebs, 10asts and 8blks—in a game six Finals clinching win) to flesh and bones mortals (6pts, 7rebs—against the Grizzlies in the playoffs last year—on his birthday!) on a gradual, measured decline with little reminders of previous greatness coming with less and less frequency. There’s nothing to be sad about here unless we fail to recall the past individual and team glories and with the ever-living online archive, this shouldn’t be a problem. Growing old and decaying is part of the deal; we just watch our athletes play out this sequence on the digitized, highly defined stages of ABC, TNT and ESPN while we experience our own in relative privacy.

What the fuck does any of this have to do with the San Antonio Spurs besides the fact that Tim Duncan has inevitably aged? (speaking of inevitably aging, if there was one player to make a deal with the devil or maybe one of the devil’s representatives, who would it be? I know the easy answer is Kobe, but I wouldn’t be surprised if it was Durant or Dwight… for completely different reasons—another post for another day) The Spurs as a collective have aged. Manu Ginobili is suddenly 34, Tony Parker 29, Antonio McDyess (if he returns) 37, DeJuan Blair’s knees alone are over 40. The youth movement that began with George Hill and ended with George Hill has been swapped out for an even younger player who has hands big enough to palm three basketballs at once … while texting with the other hand at the same time! Kawhi Leonard’s hands are freakishly large, but he’s more than a set of huge mitts. He’ll likely challenge Richard Jefferson for playing time at the three. So there’s at least an eye to the future, but in San Antonio, it’s difficult to catch a clear view of the horizon over the receding shoulders of an exiting Duncan.

Among the living legends roaming the streets of San Antonio is the most ancient of all: Gregg Popovich, the Garry Kasparov of NBA coaches. The fact his name has two ‘Gs’ only adds to the mystique. Pop’s success with an aging roster playing an updated style is indicative of his powers both as a visionary and a manager. 2011 proved the old wizard still had the magic; he just didn’t have the tools. What does 2012 have in store?

What’s so different about the Spurs’ decline and that of the Suns? I asked myself this while I was walking home earlier and while the differences were numerous, the Suns had romance and dreams on their side while the Spurs were coldly analytical and capable of merely living out their dreams. Mike D’Antoni’s constant middle finger pointed in the direction of convention and the Lakers won the Suns fans far beyond Arizona’s borders. The Spurs were real, practical and boring as hell to the average basketball fan. They played defense and made mid-range bank shots and gave quality minutes to the Matt Bonners and Bruce Bowens of the pro basketball world. The only Spur who designed outside the lines was and still is Manu and even his rejection of conventional American-style basketball somewhat seemed to fit in with the Spurs. Controlled improvisation? Practiced spontaneity? Who could be so confident as to say? There were and are drastic differences between these two clubs and in the end it mostly had to do with what could’ve happened versus what did happen.

If you want immortality, set a record. The flesh tears and bones break. Immortality is for numbers and ideas. The Spurs have done a masterful job with this group and extended the shelf life and entertainment value further than it probably should’ve gone, but I’m unsure, uncertain what happens next or what needs to happen next. There’s the simple answer: It’s a business. Then there’s the reality of it: We’re humans, the Spurs front office is filled with humans and its arena is filled with humans who’ve adopted Duncan and Friends like travelers on a shared road with a shared destination. I don’t know what will happen, but I’d be happy to supply the booze and pull up a chair for a chat with Popovich and RC Buford and hear their honest, unspun, unfiltered, unabbreviated, unabridged thoughts on the future of these San Antonio Spurs.