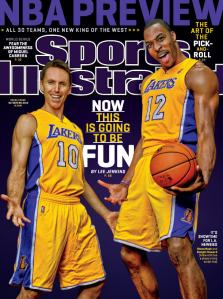 I’m a Lakers fan. Make no mistake about it. Beneath all my demands for fairness and bridging the rich-poor gap acrimony, I still cheer for the Lakers and their “see money, throw a problem at it” philosophy. So you can imagine my curiosity last year when I’m watching the Lakers slowly implode like a basketball version of an ugly, slow, painful deterioration of something or someone you know. Maybe it’s like when Brittney Spears fell off the rails in public and her fans just sat there and watched and they probably wanted to help her … “If I just had a chance, I could help Britt.” I can see some Lakers fans convinced they had solutions to the incurable problems the team had last season. But not me. I wasn’t one of those fans. I sat back and watched in enraptured entertainment. Kobe Bryant, Dwight Howard, Steve Nash, Pau Gasol. So many of us presumed that the star power alone would blind opponents, leaving them defenseless to an onslaught of well-aged skill and Howardian beastliness down low. And when the reality of age and fragility set in and the team underachieved for so many games, those shining stars dimmed to a cynical glow and Lakers fans frowned and grunted through an extended shit show where nothing made sense and everything went wrong.

All the while I sat bewildered, but unexpectedly entertained. In the NBA more so than the NFL or MLB, you can pick a handful of contenders at the beginning of the season and be fairly confident in your assessments. For all of us to whiff so badly last year; including the Kupchaks and Busses of the world … well, it was like watching a Hollywood blockbuster with one of our favorite action heroes as the star, but only the script goes off somewhere. The hero doesn’t fit the prototype we’re trained to recognize. Superman can’t change into his blue spandex in the phone booth let alone fly through the air. The Batmobile catches a flat and Bruce Wayne has to wait for Alfred to show up and change the tire. Meanwhile, Lex Luther and the Joker are taking a big ol’ dump on Metropolis and Gotham. That was the Lakers we saw last season.

Now in the fall of 2013, on the cusp of another NBA season, I’m all settled in, prepared for a crummy Lakers campaign that rivals the miserable outcomes of the post-Shaq Lakers like 2005 when Kobe “led” the team to 34 wins. But the difference is obviously that we’re prepared for it now. That preparation or expectation is the critical piece. When we know what to expect, we can maintain an even keel while still experiencing fluctuations in emotions. It’s the unexpected that challenges our conditioned responses.

You might be wondering why I’m just now drifting back to these Lakers memories. After all, we’re several months removed from the realization that the Lakers were not who we thought they were. A couple of my other favorite teams are presently walking through their own purgatories of expectation and I’m reflexively flashing back:

The current Manchester United team, another team I support (go ahead, make your front-runner jokes, but know I’m a long-suffering Cubs fan as well and experience both sides of the winning/losing of fandom), is enduring a challenging season with their new skipper, David Moyes. Moyes is replacing the living legend, Sir Alex Ferguson, who managed the world’s most recognizable sports franchise for over 26 years. In that span, he etched out a profile for himself that, on a global scale, exceeds that of Pat Riley, Red Auerbach, Phil Jackson and all the rest. Ferguson was an anomaly in the English Premier League where clubs cycle through managers more frequently than most of us go through a pair of jeans. United has mostly the same roster they had last year when the dominated the league and secured the title with multiple weeks still to play. It was fantastically anti-climactic and Ferguson left the new manager with a sturdy foundation on which to build a new legacy for himself and his new club. Instead, nine matches into the new season and United has struggled with a miserable defense that is regularly outplayed and compounds their shortcomings with knuckleheaded decision making and lapses in discipline. Yet … as I watch the team, I’m taking a strange satisfaction in the struggle. It’s not a sporting masochism. In the case of United, there’s this part of me that’s enjoying the uphill climb of this underachieving group. Maybe it’s because it’s still early in the season and I have faith that they’ll figure it out, that patience will win the day. Or maybe it’s just the feeling of stepping into a different, less comfortable role. Maybe I feel better being on more relatable terms with my friend who’s a Tottenham supporter? Or maybe I’m just a confused elitist who’s confusing the struggle with a footballing equivalent of slumming. Either way, it’s a more engrossing feeling than the anticlimactic sprint away from a pedestrian pack. 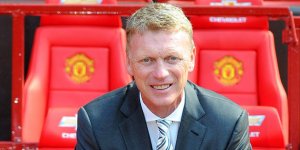 At home, my Seattle Sounders are flailing through the final few weeks of a grueling MLS regular season. Where the team was riding the natural high of an eight-match unbeaten streak that saw them climb to the top of league standings, they’ve now lost four straight matches by a 2-12 deficit. The Sounders haven’t won a match since mid-September. Players are hurt, the defense is in shambles, luck favors their opponents and yet, I find their matches more magnetizing than ever. I tune in or go to matches wondering if this is the game they turn it around. I anticipate the euphoria that must come with a break from these autumnal doldrums. With the MLS playoffs a week away, the Sounders somehow backed into the playoffs, and instead of drinking myself to sleep or crying tears of blue and rave green discontent, I’m cautiously hopeful that things will turn and we’ll look back on this rough stretch as nothing more than a funky smelling aberration. Something to share a beer over and thank the soccer gods it’s passed. 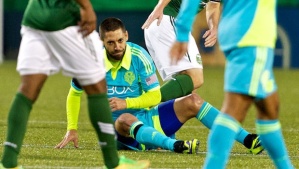 Familiar site. Not fun to see.

Let’s be real here … maybe I just don’t know how to be a fan. Maybe there’s some twisted gene hiding in my DNA that’s afraid of the pressure that accompanies a winner. Maybe I just don’t get what it means to be a fan, because I’d expect a different reaction. I’d expect to be pissed off or pouty about these things, but I just accept it with curious observation. The 2013 Lakers, Sounders and Man United teams have stumbled into strange playoff positions with dust-covered aging rosters and defenses that can be exploited by younger, less-skilled opponents. And I sit back and take it all in with a chuckle at the unexpected deviation from the narrative and the strange satisfaction I feel from not knowing what’s coming next. The Lakers, Sounders and United … my teams, my disappointments, my entertainments through winning, losing, and all points beyond and between.