Sunday to Monday Thoughts on Basketball #8

Where to begin on the first Monday of May? Five game sevens? The Pacers gasping for, and finding, that final breath? What’s David Stern up to these days? Damian Lillard? Are we all just over-obsessed with this game? Well, let’s leave that last question alone lest we start questioning our time management, meaning, existence, and the rest because if True Detective taught us anything, it’s that “It’s all one ghetto man, a giant gutter in outer space.”

• Is it a myth that the greatest two words in sports are “Game Seven?” I mean, we can debate the greatness of words all day long, but given what led up to this past weekend’s bonanza of game sevens, Saturday and Sunday felt like letdowns of sorts. This little tiny space I’m filling with words isn’t appropriate for the exploration of such a topic, but nonetheless, our five games had an average point differential of 10.4. And if we take out the two outliers (San Antonio’s 23-point victory and the Nets one-point squeaker), it drops to 9.3 – not exactly the type of edge of your seat drama it was billed to be (or hoped to be – is the billing nothing more than the ceiling we all hope for?). The closest of the games, Brooklyn’s road win in Toronto, was dramatic, but sloppily so with missed free throws, Kyle Lowry bowling into opponents, and the exhibition of Paul Pierce’s baby vertical leap to “block” a shot and secure the victory. Just typing that out and reliving the moment, I’m disappointed.

• Maybe everything in life seemed dull after the Rockets-Blazers game six on Friday night. Maybe that’s why the game sevens were the basketball equivalent to a meal comprised of saltine crackers – filling, but unsatisfying. Maybe it’s all Damian Lillard’s fault. My brother arrived in Seattle on Thursday morning. He came from Des Moines, Iowa and showed up in his Iowa Hawkeyes visor and t-shirt, repping to the fullest. He cares not for pro sports, but rather embraces the notion that college athletes do it for a true love of the game. While we disagree on these romantic notions, we can still find common ground on the same couch – which we did on Friday night, with bellies full of sushi and eyes fixed on the TV, we watched the Blazers and Rockets unfold, NBA style. Even my brother, the NCAA-loving, college football craving, anti-pro athlete Midwesterner, was locked in. And how could he not be? I could’ve swapped out my brother with a seal and the hungry creature would’ve likely been just as rapt at the battle of two foes so equally matched that only two points separated them despite playing six games and hoisting up over a thousand combined shots (Blazers 670, Rockets 672). I sank when Harden missed that shifty little pull-up as Dwight cleared out the entire Blazers frontline, leaving a clear path for the sneaky, slithering Chandler Parsons to glide in and score the go-ahead bucket – with .9 seconds left! So we sat through the timeout, expectations low, odds fully understood. And we screamed and bonded and scared the shit out of my dog when Lillard busted free and buried a shot that caused Portland tremors to be felt all the way up in Seattle. Holy shit, I’m high just thinking about it. We talked about the shot on Saturday and were still shaking our heads about it on Sunday and I still have goose bumps when I re-watch the highlights. So if anyone’s to blame for the unrealized promise of weekend hoops, let’s blame Lillard, for it was he who rose the bar too high.

• Back in March, I wrote about the Elias Sports Bureau’s stranglehold on stats records. I don’t necessarily consider this a bad thing, I just wish us normal humans had access to the same volumes of data. Alas, we don’t, so we depend on Elias to tell us just how rare are the performances we witness. This week, in a Zbo-less game seven, Russell Westbrook reminded everyone on the planet how deliciously destructive he can be when he went nuclear for 27pts, 16asts, and 10rebs, the kind of fantastic triple double that has only been accomplished three other times in playoff history: twice by Oscar Robertson and once by Chris Paul. Worth noting that the great Magic Johnson accomplished this feat eight times in his career – all in the regular season.

• Speaking of Magic Johnson, it was somewhat tacky to hear his unfiltered thoughts on Mike D’Antoni’s departure last week. While Magic’s delivery is certainly up for debate, his sentiment is likely felt by most Laker fans. D’Antoni was caught in a tough spot with an aging and injured roster, but didn’t do himself many favors and failed to garner the front office’s support. As is so frequently the case with Lakers rumors, every coach that has even a slight luster attached to his name is being targeted for the position. One half expects to hear rumors that Bill Sharman will be resurrected, but only to compete with Pat Riley for the job. If that last line reads like utter nonsense, it’s because it’s the Lakers and where the rest of us are grounded in cold reality, they’re living in a sun splashed fantasy where dreams can be bought and made.

• As I was half watching the Spurs pound nails in the Mavs coffin yesterday, I was regularly hypnotized (Biggie Biggie Biggie, can’t you see?) by Manu Ginobili. I’ve never doubted the man’s ability, but as a Lakers fan in the early 2000s, my Spurs distaste stood in the way of my objectivity and I refused to fully embrace the joie de vivre of his uniqueness. It’s only been in these past couple of years that I’ve given up the bitterness of my competitive youth and fully appreciate my Manu with the Spurs on the side. More so than any other player of the past 10-20 years, Ginobili scares the shit out of me. It doesn’t matter what he actually does, what he could do is frightening. While last year’s Finals appeared to mark the final descent of Ginobili’s innate feel and Bruce Lee-like reflexes, this year is back to the Manu of old. He’s attacking, playing with feeling, in tune with loose balls, and doing all those little winning things that make Manu Manu. There are certain people in this world you trust with precious items, certain people who can handle your Faberge Egg while riding a dirt bike across the Grand Canyon in a meteor shower. Manu Ginobili is one of those people. Enjoy his game while you still can.

• More from the good number crunchers at Elias: How good has DeAndre Jordan been? If we handed out MVP’s for each series, he’d get my vote for the Golden State-LAC series. The Warriors were criminally outsized and the young Jordan did everything in his copious powers to exploit that. How about 12ppg, 15rpg, 4bpg while shooting 75% from the field and 50% from the line? Elias tells us that Jordan is just the second player in league history to grab 100 rebounds and block 25 shots in a playoff series (blocks weren’t recorded until 1974). The other was Tim Duncan who had 102 rebounds and 32 blocks in 2003 against the Nets. Duncan did it in six games – 17rpg and 5.3bpg!

• Not much else happened last week except for Adam Silver giving racist owner Donald Sterling the heave ho. Any racist owners that remain in the league are firmly in the closet with the door shut extra tightly. 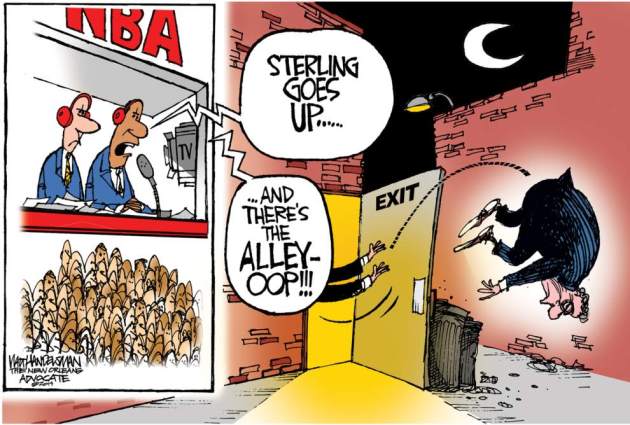 The work of Walt Handelsman