Maybe it’s happened before like back in the weird forgotten 1970s of America, but rarely have we seen a batch of rookies arrive with such an emphasis on their hair: Nerlens Noel‘s brick top flat top, Elfrid Payton‘s Edward Scissorhands angles, Nikola Mirotic‘s light-swallowing beard. And there’s also Andrew Wiggins. If the NBA is a league for its radiant styles, it’s all predicated on deep substance and now that spring is upon us, the aforementioned rookies have combined their obvious talents with money-winning consistency.

The number one pick and boringly-styled hair-having Wiggins hasn’t required the same type of learning curve as his cohorts. His monthly splits look like a pyramid of sorts with a steady climb through the holiday season and a peak in January. It’s not that he’s fallen off, just that his January with nearly 20-points/game, a 55% TS, 109 O-Rating, and nearly a three/game was better than anything else heâs done this year.

Data from Basketball-Reference. Layout from Tableau.

It’s beyond the stats though. A couple nights ago the young Wiggins (just turned 20 in February – to be young again) delivered one of the dunks of the year when he used every bit of his 40+ inch vertical and smash slammed on everyone’s favorite French basketball player, Rudy Gobert:

But Wiggins is the exception and not the rule. Unlike his elaborately-coiffed rookie counterparts, Wiggins’s excellence is already old hat (we’re in hyper time). Noel, Payton, and Mirotic have needed a combination of time and opportunity to replicate their previous successes at the NBA level.

Take Payton, the 6’4″ Louisianan point guard who’s about a year to the day older than Wiggins. Payton was Orlando’s opening night starter, but lost his spot about halfway through November when he his TS was in the low 40s and his Ortg was in the high 80s. Then March rolled around and maybe it was the All-Star break (which he participated in) or turning 21 and finally being able to drink or who knows, but things have come easier including back-to-back triple doubles in March and a seven-game stretch where he averaged 14-pts, 9.5-asts, nearly eight rebounds and a pair of steals while shooting 50% from the field. Orlando only won a single game in that stretch, but … well, let’s not focus on that.

Mirotic is a bit different and not just regarding ethnicity or age. Mirotic’s rookie season has existed at the mercy of Bulls coach Tom Thibodeau who patrols the sideline with his Cookie Monster voice and stubborn rotations. Only an intervention brought on by injuries have unshackled the Montenegrin Maestro. From October to February he averaged below 20 minutes/game despite the Bulls going 12-2 in games where he played over 25 minutes. March has been something of a Dr. Jekyll and Mr. Mirotic as his numbers cranked up in a way that would demand PED testing in baseball. His scoring has gone from under six points/game in February to over 20/night in 15 March games. His usage rating was up over 30% for the month which if pushed out across a season would put him in the top-ten in the league. Despite the increased usage and minutes (over 30minutes/game in March), his TS is still a close to 58% on the strength of shooting nearly 84% from the line on over seven free throw attempts/game. It’s almost like the increased reps and opportunity have resulted in Mirotic having even greater confidence and comfort exploring the range of his offensive talents.

And then there’s Nerlens. I’m writing about him last because heâs the most titillating of the bunch which isnât to say heâs the best because I donât know or care to know who’s best. It’s just that Noel, with his flat top and baseline-to-baseline high-energy act of harassing opponents like a never-ending human basketball Exxon Valdez disaster covering the opposition in some thick suffocating existence is my favorite. In as much as each of these players has grown and developed from the fall to the spring, Nerlens’ growth is the most striking. The increase in on-court opportunity has been light as he’s hovered around 30 minutes/game all season, but meanwhile his game has come together in a way that one hopes breathes hope into the fledgling Philadelphian fan base. Noel hasn’t even turned 21 yet, but if we believe in the guy we’ve seen in March, then we’re looking at a kid capable of averaging in the teens in points while grabbing double digit rebounds, getting over two steals and two blocks each night. He’s the rare big man with elite agility, quickness, and length that allows him to completely disrupt the other teamâs offense. Again, if we have trust that his March numbers arenât some funky aberration then weâre looking at a kid capable of defensively impacting the game similar to David Robinson, Hakeem Olajuwon, and now Anthony Davis. (Off topic, my phantasmagorical mind canât help but root for a New Orleans frontline anchored by the Brow and Noel.) 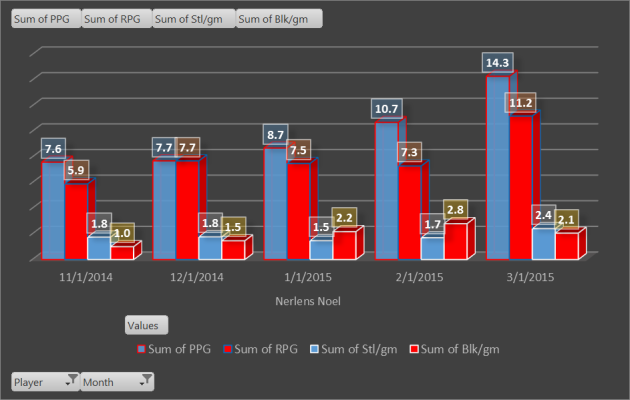 Spring will soon be over and with the exception of Mirotic, these rookie years will end with the regular season. After all, we can only be rookies once and while people are lining church pews to celebrate Easter Sunday with Jesus and adults in snow white rabbit costumes gnaw on oversized carrots while doling out Cadbury eggs and listening to biblical tales of resurrection, these rookies will be transitioning into summers of work and expectations. With our favorite rookies, weâll sleep through sunny summers and wake up sunburnt and confused at the falling leaves of Halloween with the presumption that Marches and Aprils are signs of things to come. Okafors and Mudiays will be the new kids, but for our four rookies above, the leeway that comes with being a first timer is forever out the window. It only gets harder from here.