The Grandiosity of Steph Curry in Autumn

We’re in November and the Golden State Warriors have played less than five percent of their total regular season games. The most recent, their fourth of the young year, was punctuated by a violent 119-69 Mike Tyson-over-Michael Spinks type victory over the Grizz – the same Grizz that took a 2-1 lead over GSW in the playoffs just six months ago. In the breezy 28 minutes he played, reigning MVP and pioneer of “new NBA” style basketball Steph Curry incinerated the Grizz for 30 points on 16 shots. Speaking in purely statistical terms, this was a below average game for Curry in 2015-16, but like I cautioned, we’ve got 78 games to go.

But in the young offering of the new season, Steph’s taking what was already a nuclear game and style replete with some kind of next world hand-eye coordination, progressively audacious handle, Doc Holliday trigger finger, and already all-time range and accuracy combination, and building on it.

In 2014-15, his first season under the guidance of Steve Kerr, Curry was a joy to behold, roughly achieving the same averages he had in 2013-14 (pts, rebounds, asts, 3s, stls, etc) while appearing in four less minutes per game. Comparing his 2014-15 to 2012-13 is even starker: he played six more minutes per game that year, but his per-game averages were lower as were his shooting percentages. His per-36 numbers from 2014-15 outshone what had already been all-star caliber numbers. Improvement is expected, but as we’ll see, the type of improvement is mostly unprecedented.

I’m going to paraphrase here and most likely screw this up, but there’s a four-quadrant concept that occurs in learning and task mastery:

If last year’s MVP/NBA champion season was step #4 for Steph where execution became second nature like breathing and sneezing and laughing, then the four games we’ve seen of him in 15-16 are closer to that scene in The Matrix when Neo is all “What are you trying to tell me, I can dodge bullets?” and Morpheus responds, “No, Neo. I’m trying to tell you that when you’re ready, you won’t have to.”

Was there a point where Steph realized he didn’t have to metaphorically “dodge bullets,” that it would just happen instinctually? On opening night last week, his first quarter should’ve been an indication to all of us that instead of seeing the illusory images on the court, he was deep in some meta coding, interpreting his opponent’s futile defensive efforts as nothing more than unprejudiced attempts designed to deter him. In the first quarter alone he shot 9-13 (would’ve been 9-12 had he not heaved up a 40-footer as time expired) with 24 points. It was lightning, violence, blitzkrieg, all-out attack, a metaphor for war. It was, intentionally or not, a battle hymn that rang out across the TNT-powered sound waves through speakers and pixels into our feeble senses. 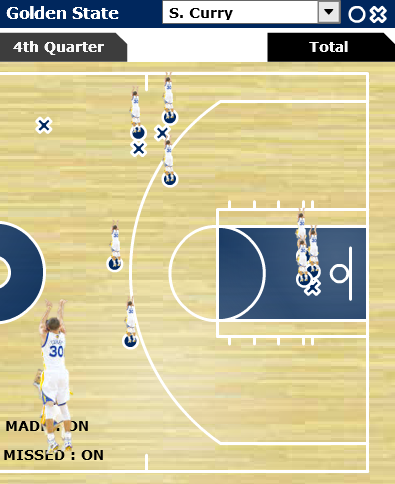 But it didn’t stop there and hasn’t stopped. We’re still hibernating in small sample size theater season, but something strange is afoot, like white walker afoot or when the levee breaks afoot. Through these piddly four games, Steph, this time under the substitute coaching of Luke “Son of Bill” Walton, is obliterating his own MVP-level stats and he’s somehow doing it with rarefied combination below:

Because the Warriors can beat other playoff teams like the Grizz by 50 points on random Monday nights, there’s no need for Curry to play big minutes. This is our loss. In four games, all against playoff teams, GSW’s closest game was a 14-point victory. He’s averaging under 32 minutes/game. What we’re seeing though is that his slice of the offensive pie has grown in 2015-16. Where Curry’s career average for field goal attempts/game has sat right 16 attempts with a career high of just under 18 FGA back in 2012-13 in 38 minutes/game, Curry’s now cramming in 21 shots/game. He’s somehow getting up 32% more shots/game than his career average while appearing in the second lowest MPG of his career. 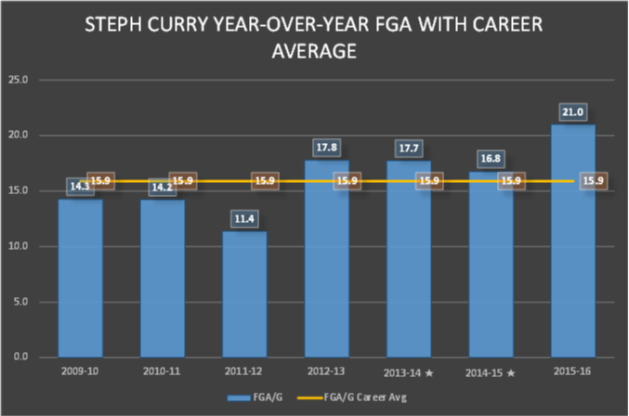 It doesn’t stop with field goals. As part of that 21 FGAs/game, Curry’s pushing an unprecedented nearly 11 3s/game. To put that into context, the most 3PAs a player has ever attempted on a per-game basis was Baron Davis back in 2004 when he put up 8.7/game. Curry’s clearly a prolific gunner himself and holds the top two single-season records for 3s made. His career high of 8.1 3Pas/game is good enough for sixth on the all-time list. But if we compare his current little four-game stretch to his career average of 6.5 3PAs/game, we see a ballsy bold leap of 64%. And if we’re truly interested in blowing our minds all over the walls in blue and gold Warrior-themed blood spatter in queer basketball-themed Rorschach patterns, then layer on the context that Curry’s spike in volume is being accompanied by a career best three-point accuracy (48.8%). He’s hitting five threes/game! 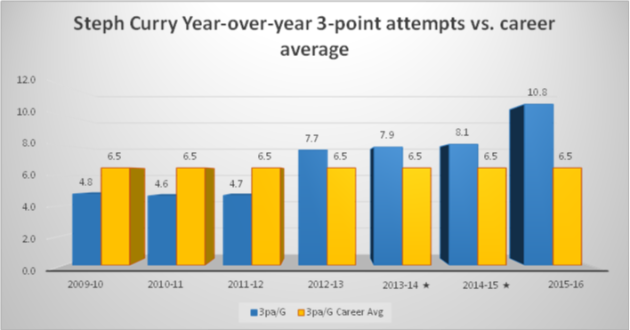 So Curry’s hovering around the perimeter, chucking record-setting threes and hitting them at paces typically reserved for guys who trade volume for efficiency. He’s taking advantage of spacing and passing and ball movement and all that good stuff. Yes to all of that, but for any notion that he’s merely perfecting the areas of already-existing strength while other aspects of his game stay flat or see small rises, he’s again a step ahead. For his career, Curry’s shooting a paltry 3.5 free throws/game. He’s third all-time in FT% just behind Steve Nash and Mark Price, so he’s getting the most bang for his free throw buck, but at 3.5 attempts/game with a career best of 4.5, he’s good at getting to the line for a point guard, but nothing special. In our shortened present season he’s somehow expanded his offensive range to include seven FTAs/game. For a guy that shoots over 90% from the line, seven FTAs/night is free points, a rhythmic bonus that builds on what’s already elite confidence. Where his increase in 3PA/game was a stunning 64%, his increase in FTA/game relative to his career average is nearly double at a 99% increase and the graph below more so than the others above clearly illustrates this spike. 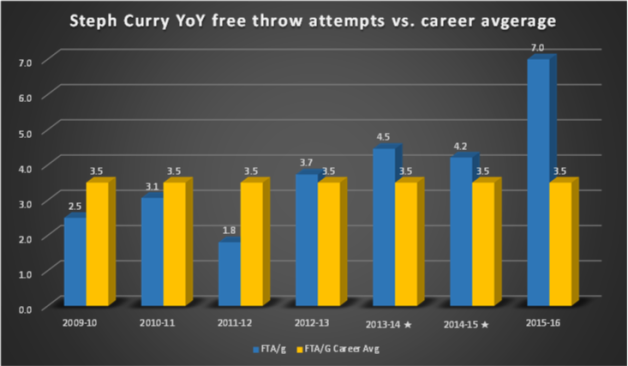 While I’ve touched on Steph’s increased makes, I chose to focus on the attempts to show the early tidal change from last season. Maybe it’s having Walton at the helm instead of Kerr or maybe Klay Thompson has a bad back. Perhaps Kerr and company saw something in the numbers or on film, something like, “More Steph is better.” Regardless of the impetus for the jumps in volume, the return Golden State’s seeing on his increased offensive aggressiveness are eye popping and head shaking. Who averages 37ppg in under 32mpg for a team that beats all comers by double digits? It is unprecedented, I swear it is. It has to be.

We’re dealing with the smallest of sample sizes to the degree that every stat called out in this piece should have an asterisk next to it (“Hey man, it’s less than 5% of games, chill!”), but what we’re seeing even through these four games is borderline comical in the way that peak Pedro Martinez or Aroldis Champan were/are comical; we know what to expect and the opponent thinks they know what to expect and it doesn’t matter. The stats tell this truth as well as any verbose language or overused thesauri ever could. And sure sure, it’s probably unsustainable, but what if by some dint in the makeup of things, it is sustainable? If there’s even a shred of sustainability going on here, may god have mercy on all their basketball-playing souls because in this new NBA, the man shooting 50% on 11 3s/game is king.

3 responses to “The Grandiosity of Steph Curry in Autumn”