An Ignominious Induction: Dwight Howard from the line

About every 15-to-20 years, the free throw gods look down on NBA giants and anoint one of their biggest, bulkiest personalities as a goat; an inept, pretzel-minded, musclebound brute of a free throw shooter. Of course, our NBA giants are more than just poor free throw shooters. They’re humans with dunktastic ferocity, superior sizes, unstoppable phyiscalities, and yet afflicted by some cruel combination of stage fright and giant-hand-small-ball syndrome. But (oh the big ol’ but!), they are at times truly incapable as free throw shooters as we saw from Dwight Howard on the night of October 24th, 2017 when the Charlotte Hornets center shot 0-9 from the free throw line, thus becoming the fourth player since the 1963-64 season* to attempt at least nine free throws and miss all of them.

50 years ago, Wilt Chamberlain delivered one of the more bizarre stat lines in league history, one that highlighted both his transcendent dominance with his neutralizing weaknesses, when he scored 26 points on 11-11 shooting with an inexplicable 0-9 from the line. For good measure, the Big Dipper added 24 rebounds and five assists. Chamberlain, a career 51% free-throw shooter who dropped down to 44% in 1967, had 36 career games where he missed all of his free-throw attempts. Of those 36, he had 15 games with three or more attempts so it wasn’t an aberration the same way it would be if say Rick Barry underhand shot his way to 0-9. But Wilt claimed to not be responsible on this February night. As Jack Kiser of the Philadelphia Daily News wrote: “He (Chamberlain) complained early and often about the use of ‘stickum’ by the Hawks, but he wasn’t about to expound on his complaints afterwards.” This isn’t completely accurate as Chamberlain did expound:

“I said I wasn’t going to say anything about it because when I do everybody says ‘Wilt is a crybaby who is looking for an excuse for his lousy foul shooting.’ If you want to know how much stickum there was on the ball out there today, why don’t you ask some of the other guys?”

Teammate Chet Walker, who must’ve been in earshot, responded, “So much it was ridiculous. The ball was really loaded. They ought to outlaw that stuff.” For whatever it’s worth, Walker, a career 80% free-throw shooter, shot 4-5 that night. 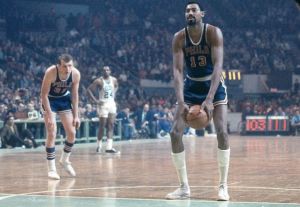 13 years later in 1980, a 6’7”, 225-pound brute of a rebounder named Truck Robinson led his 19-4 Phoenix Suns against the Bulls of Chicago. Robinson was a former rebounding champion with a career 66% free throw average. On this night he was described by Richard Dozer of the Chicago Tribune as someone “who does a lot of things well but can’t shoot free throws. Against the Bulls, he descended into the pits of ineptitude previously inhabited alone by “Stickum” Chamberlain. It was a close game against the Bulls and even a sub-standard night of free throw shooting, like 30 or 40%, from Truck could’ve alleviated the stress. As Norm Frauenheim of the Arizona Republic wrote, “Phoenix had a chance to stretch its now-precarious lead to six points nine seconds later. (Ricky) Sobers had fouled Robinson. It didn’t matter. Robinson’s long night of futility from the free-throw line continued. He missed his eighth and ninth attempts – the ninth never even touched the rim.”

At this point, my pop-culture, meme-saturated mind immediately hears Homer Simpson’s “D’Oh!” followed by the massive splat of a facepalm. Let’s give the last word on Truck’s forgettable night to Dozer from the Tribune who tells us what happened after Robinson’s final air ball, “Now Coach John MacLeod got smart and took out the Suns’ free-throw patsy.” A night so bad we’re resorting to name calling? Oh, the shame. 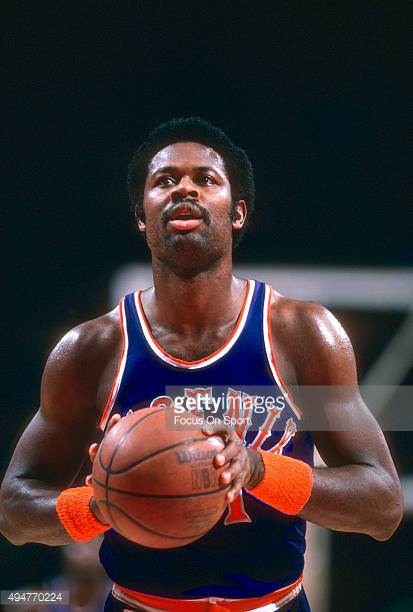 December of 2000, “Stickum” Chamberlain’s cultural offspring, Shaquille “Chamberneezy” O’Neal, in the ultimate show of anything you can do, I can do better, one-upped Wilt and Truck with the worst of the worst, the stinkiest of the stink, a rotten egg of putridity the likes of which the NBA hasn’t seen before or since: 0-11 from the line. In what would borderline as trolling in today’s vernacular, Tim Brown of The Los Angeles Times led off his recap painting an image of utter helplessness, “His right arm draped over his new free-throw coach, Shaquille O’Neal walked stiffly from Staples Center on Friday night. It didn’t work again. He missed all 11 free throws—an NBA record.” It seems some of us, no matter how hard we try or how badly we seek to rectify the errors in our ways, are incapable of salvation, doomed to recurring cycles of relative failure.

And finally, after wandering the halls of bricks, air balls, stickums, and free-throw shooting coaches, we arrive at the Chamberlain-O’Neal torch bearer: Dwight Howard. Seeing Wilt and Shaq on this list, there’s a sense of inevitability to Dwight joining them. For his career, he’s been a better free-throw shooter than his forbears, but there’s the same combination of absurd hulking size coupled with fragile, blot-out-the-sun ego. Dwight had to join this list, but somewhere along the line, we lost our collective desire to examine, through humor or (over)-analysis, the suck. In Rick Bonnell’s recap from the Charlotte Observer, there’s nothing more than reference to the 0-9 shooting. SB Nation’s At The Hive team blog referred to Dwight’s night as “dismal,” but nothing more.

I wanted quotes, acknowledgement, acceptance, something. Maybe this is more my problem than the media’s, but traveling back in time and consuming the colorful quotes, excuses, and descriptions puts the relative inattention to Howard’s crapfest in strange, apathetic context. It’s not just possible, but rather likely that somewhere on these internets or across the airwaves of local Charlotte radio these abysmal attempts at shooting free throws were rightly excoriated and that I’ve just overlooked them. If that is the case, I hope you found those criticisms and enjoyed them. If not, we can only hope that our struggling athletes re-learn the arts of excuse making and our scribes explore negative anomaly with the zeal of positive.

**Bonus: While Basketball-Reference’s database goes back to the 1963-64 season for game logs that include free throw attempts, my research referenced a game on November 4th, 1960 when Chamberlain shot 0-10 from the stripe. In true Chamberlain fashion, he countered the poor night of shooting with 44 points, 39 rebounds, and 22 blocks – this according to Kiser of the Philadelphia Daily News. Chamberlain was comfortable owning his struggles as he said, “That kills me. Missing all those foul shots like that, I know I’m not a good foul line.” Then there’s some references to “the underhand sweep” which is apparently a free throw form Chamberlain toyed around with along with some of the most colorful sports writing. Kiser refers to Detroit’s center Walter Dukes as someone “who sometimes resembles a wrestling octopus in action,” frequently writes his name as “Waltah,” quotes Dukes as claiming, “I could score as many points as Wilt if I took as many shots,” and gets Wilt on the record saying, “Do I play harder against Walter than the average guy? Well, maybe I do … That boy just gets me mad with that rough stuff of his. He throws elbows at you when there’s no need to throw them. He’s just naturally mean.”