The Lakers-Nuggets game is just wrapping up and I’m seeing St. Patrick’s own Al Harrington drop 24 from a variety of spots on the court; a typical performance from a man who’s remarkably expanded his game to include the three-point shot.

Today, I salute Al Harrington for both his commitment to growing his game and the fact that he’s a member of the recently created 5,000-800 Club–that’s at least 5,000 rebounds and 800 threes made. What does all that mean? It means he walks with Hall of Famers (Kobe, Gary Payton, Dirk, Pierce) and belongs to a small fraternity of long-range shooting big men who exist in part to confoud video game developers (Tim Thomas, Cliff Robinson): 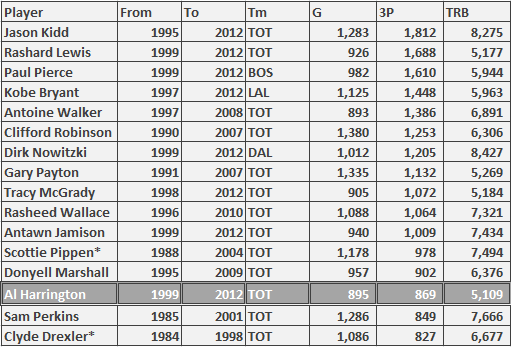