“In the final analysis, the truth always evolves from the state of total madness.” – C.R. Stecyk III

The quote above wasn’t written with the NBA labor negotiations in mind and I don’t even know if it’s applicable, but I read it the other day and started thinking about any truths that have emerged from the madness of the NBA lockout. We’ve got a lot of facts, but I’m not sure we’ll ever be privy to the truth. The truth I’m most interested in is the non-factual variety like what Stern the man/attorney honestly thought was a fair deal.

We (tentatively) have an NBA season awaiting us and I can’t lie; I was excited when I woke up at 6:30am on Saturday to text messages informing me of the good news. I was excited, despite my ongoing disgust with David Stern’s smugness and the hardline owners’ insistence on publically giving players the shaft.

In 2011 we’re blessed with insights that 1999’s lockout couldn’t deliver: Real-time updates via Twitter or NBA TV. I was able to watch post-negotiation press conferences with sleepy eyed Sterns and Billy Hunters spinning responses to questions from drowsy reporters who I’d been following on Twitter for the previous two hours. So the truth and madness I mention above fall somewhere in these marathon negotiations and the updates and interpretations that accompanied them. With unprecedented access, we heard from unidentified “veteran players” and “owner sources” in real time and because we’re a refresh culture, we consumed it and waited for the next update. Truth was somewhere in there, but with all the unnamed sources and agendas on the table, it was impossible to determine truth from maybe-kinda-true.

I have to concede defeat on finding truth in some things—like if a 36-year-old Michael Jordan would’ve called out the 2011 version of himself the same way he called out Abe Pollin—but now we can get back to rediscovering and reconstructing new truths out of the product the NBA players produce on the court. Before that though, there’s an element of resolution to the process. I’ve never been one to hold a grudge, but during the negotiations, when the owners threatened the “reset offer” of a 53-47 BRI split in their own favor, I was disgusted. I don’t have a background in negotiating for pro sports franchises, I’m not an attorney and I was just starting college when the last lockout was going down. I also don’t have the aforementioned access to the owners’ real motivations so I don’t how real the threat was, but I do know it was public and there were a band of rogue owners who potentially preferred to lose the entire season instead of stopping at gaining a 50-50 BRI (BRI was previously 57-43, players) split which results in three billion dollars in basketball-related income to shift from the player side to the owner side over the 10-year duration of the collective bargaining agreement (CBA).

The whole operation left more than a shitty taste in my mouth and I had to question whether or not I wanted to support a league with owners hell-bent on driving a bus full of other owners, players, coaches and fans off a cliff into a one-year chasm of basketball purgatory instead of accepting what was already a winning deal. For me, that would primarily mean no NBA League Pass since Clay Bennett and Stern already drove the Sonics out of town and left the city NBA-less until further notice.

But is my bitterness enough to keep me away? Are my pro-labor (I don’t care about the amount of money or perks the players get, they’re still the labor in this case) values strong enough to turn me away from the disgustingness of the past five months? I knew the answer was no all along.

Since the lockout kicked in, I’ve followed the digital circus from the comforts of my laptop: the optimistic press conferences, the crushing letdowns, the gossip, which NBA players are taking their talents overseas, the Jordan (de)evolution, and all the other tidbits that basketball writers and fans have had to search out to fill in for the hole left by the NBA. Because I never blamed Rashard Lewis for taking Orlando’s money, I never held a grudge against the players. Why would I? Because they had a nice deal in 1999? Because they make millions and want to protect some of it? Because owners and the front offices they hire continue to dole big contracts on small-time players? I don’t hold any of that against the players. Could they have negotiated more effectively? I’m guessing, yes. Could they have done more to resolve this earlier? Probably. The players gave and gave and gave and the owners still demanded more.

This isn’t to say the owners are all bad or even that they’re bad at all. It’s to say that fans tune in and turn on to watch the league’s roughly 450 players do what only a handful (relatively speaking) of people on the entire planet can do. I was bitter watching the owners do what they do because negotiations (particularly billion-dollar negotiations played out in the media) can and do get ugly. As a culture, we’re perfectly happy to watch petty spats and infighting, but not when there’s a cost attached to it and in this case the cost was nearly two months without the NBA. All things must pass (tentatively) and if everything goes accordingly, we won’t have to see or hear much from these owners for the next ten years.

Without digressing too much here, I want to acknowledge some of these my way or the no way owners embody traits I do respect. The willingness to stand up for what you believe is right in the face of all criticism is admirable. There are always going to be fine lines, but I believe some of these owners believe the only way they could be successful or break even was to have a 53-47 split in their favor. And if that’s what Stern was willing to voice to the public, then a handful of this bunch probably wanted to go even further. Fortunately, cooler heads must’ve owned the day. 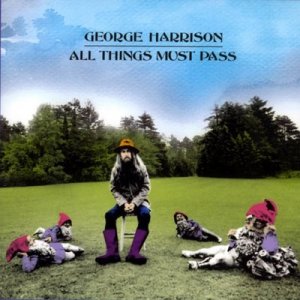 As I mentioned above, like the great George Harrison album of the same name: All things must pass. We missed out on two months of NBA basketball and what will end up being 16 games. The season will be odd ballish and it’s likely we’ll see a higher rate of injuries; particularly among older players. Different isn’t always good, but with an 82-game season, monotony can and does creep in. Cramming 66 games will create an environment no one’s used to. It’ll be like basketball vagabonds barnstorming their regions for inter-conference battles on little sleep or rest. At times, it’ll be sloppy, but out of chaos flourishes creativity—from the coaching architects and the players on the floor. That might be happily blind or naïve, but we already know the abbreviated free agency period is going to pace like a speed addict. Just think if LeBron would’ve been a free agent this year instead of last…

There’s nothing to be sad about anymore. Now is the time for handshakes, hugs (or “black bro hugs” if you speak Shaq’s language) and toasts (to who? Billy Hunter and Stern? C’mon, we can do better than that, right? Right? Moving on … ). Let’s toast to rediscovering truth through our own eyes rather than second and third hand accounts and speculations about what went on behind the doors and across the tables of esteemed New York City meeting rooms where we’ll never cross the threshold and hear the likes of Jeffrey Kessler battle with Stern and Adam Silver (are these our great debates?). Let’s toast to JR Smith, the Mahoney of the NBA. He’s stuck in China and no matter how much of a brat he tries to be, it sounds like he’s stuck there until March. How about a raised glass to the rookies who (no matter what words their agents have forced into their mouths) had to be wondering, “What the fuck did I leave college for?” And a nod to what could be the last hurrah for this version of the Celtics and Spurs; a pair of veteran teams who wore the crown well.

With any luck, we’ll pick up where we left off with last year’s unpredictable playoffs. Yep, Dirk and Mark Cuban are defending champions. Kobe’s still motivated by something otherworldly (underworldly?). LeBron and Dwyane have probably fine-tuned their on-the-court symbiosis in all these all-star and charity games they played in this summer. And while we’re hoping; maybe Russell Westbrook’s had a summer of epiphanies after re-watching the game tape from May.

Finally, if sadness has to exist just to provide balance in the greater cosmos, then let’s hang our heads in silence for the honorary three-second count reserved for the NBA big men who said goodbye to us this past summer: Shaquille O’Neal and Yao Ming. We haven’t been this devoid of quality back-to-the-basket bigs (not sure we can even put Yao in that group) since I’ve been alive and probably not before that either.

It’s been a long two months, but we made it. We’re (almost) here:

Uncategorized it's the return, lockout, NBA, NBA Lockout
← Ghosts on Video Leave the Mess, they should see this →

2 responses to “Lost between Truth & Madness”