It wasn’t always about Jarrett Jack, but for now at least it will be about him; this burly, hard-headed (in appearance) man with his brick wall frame, compact like a boxer’s, eyes locked in what appears to be a perpetual squint—in anger or humor—eyes given by mom or dad, eyes passed through the gene pool generations ago perhaps, a head that looks almost too big for its body; always cleanly shaven as if he calmly stands in front of the mirror before games and at halftime, straight razor in-hand, head covered with thick white shaving cream, slicing the hairs away from that immense rock-like brown dome with the same precision he’d cut open an adversary’s throat; a face and appearance (particularly in scowl mode) that draws comparisons to emcee Sticky Fingaz and could land him a spot in the aforementioned’s aggression-fueled hip hop group from the 90s, Onyx, with their furious black baldness, black hoodies, black pants, black boots. This is about Jack, who’s traveled the jet streams of the NBA; from and to teams I couldn’t even recall off the top of my head (completely blanked out on the long lost Pacers days). A journey begun back at Georgia Tech with BJ Elder and Paul Hewitt and moved on to Portland and Indiana and Toronto and New Orleans and now Oakland. Always steady, but never anyone’s first choice. Passed over in favor of Jose Calderon, traded for Jerryd Bayless not once, but twice, a multi-time trade casualty … 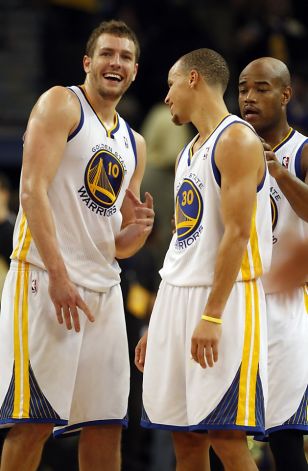 Typically in the background

When I see Jack in 2012 playing with Steph Curry (as a replacement of sorts for Monta Ellis) I see indispensability and luxury. In terms of pure ability, it doesn’t matter how he compares to Monta, but in terms of the Golden State Warriors, he’s a flawless fit, pragmatic and versatile, complementary and embraceable. He’s glue, Velcro, a viscous player that appears in 83 games in an 82-game season, oblivious to any limitations. He’s the kind of dude every team needs even though they’re quick to send him on his way. Call him a liberator in that he can relieve Curry of his playmaking duties.

2012 isn’t the Year of Jarrett Jack, it’s just another in a career of underappreciated years. What’s so profound about Jack is that there’s nothing profound about him. He does what he’s called on to do and in a league of specialists and superstars, he’s easily taken for granted—just like the PJ Browns and James Poseys of the world. I’ve been thinking about this all season and now I’m expressing it in full, or maybe just in part because I’m fairly certain Jack will provide plenty more reasons to write and think and consider his uniquely simple place as a backup guard in a league gone mad with awards, titles (of the individual variety) and over-analysis.

(and no, this hasn’t turned into a Golden State Warriors fan blog)