Unencumbered by Accolades: Carmelo Anthony circa 2014

It only seems appropriate that in Carmelo Anthony’s greatest individual season he’d be snubbed by the major awards, but of course, this is what happened on June 4th when the All-NBA teams were announced and Melo found himself out in the cold while forwards with better stats, more wins, and probably more welcoming narratives (or reputations) were treated to the glory (and possibly financial bonuses) that come along with such accolades. 15 total players (six forwards) made the three All-NBA teams and #16, based on voting, was Anthony so it’s not like the voters forgot about him, they just deemed other forwards more deserving.

Given how well Melo played in this otherwise depressingly barren Knicks season, I found myself wondering how many other guys have played this well and been overlooked by the voting press? I chose a couple of his top stats to get an encompassing view of Melo’s 2013-14 season: 27ppg, +20 PER, and +10 win shares (for the first time in his career – surprising given how many +45-win teams he was on in Denver where he [equally surprisingly] only led the team in win shares once). Applying this criteria across league history gives us a decent look at players who have shouldered their team’s scoring load while contributing significantly to team success. It also removes anyone who scored under 27ppg, so guys like Chris Paul, Isiah Thomas, Magic Johnson, Bill Russell, Dwight Howard are residing in the blind spot of this filtration.

Looking all the way back into the league’s annals, we see 43 players have accomplished the 27ppg/20 PER/10 WS trifecta a total of 136 times. Michael Jordan did it whopping 11 times while LeBron James just joined some elite company in Oscar Robertson and Karl Malone as the only players to accomplish it eight times. The rest of the list is made up of exactly the kind of Hall of Famers you’d expect to see – Wilt, Bird, Kareem, Shaq, Jerry West, Kobe, etc. Feel free to make your Mt. Rushmores or $15 rosters out of this bunch. Melo’s made it just once.

Since George Yardley made the All-NBA first team back in 1958 with the Detroit Pistons, the 27/20/10 has been a pretty safe way to ensure making one of the All-NBA teams. Of the 136 times players have achieved this mostly random set of statistical measures, 126 of those resulted in first, second, or third All-NBA inclusion – or roughly 93% of the time it’s an indicator a player will be tabbed for award-winning success. 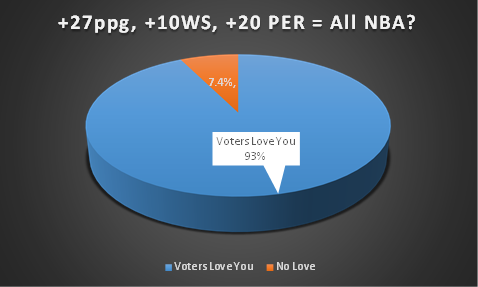 The 1988-89 season was the first year the league added the All-NBA 3rd team. Since then, the 27/20/10 line has become an almost lock to get the attention of voters and be honored as one of the best in the league. It’s been reached 60 different times since 1989 and of that 60, just two players (~3%) have failed to achieve the nod: Clyde Drexler in 1989 and Melo this year which means the success rate with three All-NBA teams in place is 97%.

Melo didn’t make the playoffs, but then again neither did Kevin Love. Love may not have achieved the completely arbitrary 27/20/10 line, but he did have a higher WS, was a dominant rebounder, better passer and led his team to 40 wins in a meat grinder of a Western Conference while Melo’s Knicks struggled to get to 37 in a lackluster East.

Love aside, if we stick with our pre-existing criteria, we see 21 of the 136 occurrences did not make the post-season. Of those 21, six (or ~29% of the non-playoff players) weren’t selected to any All-NBA teams so while it does raise the rate significantly from 7% overall, it’s still a relatively low number.

Then there’s the occasional outlier like Walt Bellamy (two appearances on the list) who had the misfortune of coming along at the same time as Chamberlain and Russell when the league had just two All-NBA teams. From 1960 to 1968, Russell and Chamberlain won every first and second All-NBA honor. Meanwhile, Bellamy struggled to find team success, but put up a ho-hum 24ppg and 15rpg over that same stretch. Or how about Adrian Dantley who reached the rare line five times in his career, but missed out on All-NBA teams three of those seasons. The forward position in the early-to-mid 80s included Bird, Dr. J, Bernard King, Alex English, and eventually Dominique Wilkins and Barkley. With mixed results as the Utah Jazz’s go-to guy and a reputation for having a difficult attitude, Dantley’s individual success didn’t always translate into award-based recognition.

Bellamy and Dantley alone combine for half of all players to miss out on All-NBA teams with the impressive 27/20/10, but it’s in shades of both players where we find the likely reasons behind Melo missing out.

Like Bellamy stuck behind Wilt and Russell, LeBron and Durant have a stranglehold on the two forward spots on the first team (James and Durant have owned first team for the past four seasons). That leaves four spots available and Melo, despite his individual dominance this year, is the oldest of the bunch. Love’s stats are video gamishly eye popping and his cohort on the second team was Blake Griffin who earned the award for the third straight season and appears to be entrenching himself as a first or second team candidate for the foreseeable future. So now we’re onto the volatility of the third team where Melo lost out to Paul George and LaMarcus Aldridge. As my dear mom is fond of saying, it’s six of one, half a dozen of another (I think my mom said that). In 2012, I wrote a piece about Melo that emphasized his lack of winning ways. At the beginning of the 2013-14 season, I aggressively criticized Melo for comments about his desire to become a free agent. If I’ve committed my unpaid time to exploring the frustrations of his narrative, I have to ask if voters are burned out by his broken record of a narrative. Has the media soured on Melo or is he just a victim of circumstance like Dantley going against Bird and Dr. J and company?

If I had a vote, it likely would’ve gone to Melo instead of LaMarcus Aldridge, but when the crop of forwards in the league is as deep and creative as it is in 13-14 and a team like the Knicks (who it has to be acknowledged that Melo asked to be here) underachieve and elicit ill-intentioned (or creatively apathetic) responses from their fans, then it’s not a surprise that voters may side with the non-Melo option. The irony here is that for all of Melo’s individual success and accolades, the team-based holy grail of a title has escaped him, but now, when his game has matured to its most refined levels, all that individual attention has become fatigued, unable to rationalize his elite-level performance with his mediocre team results. His fans are still legion, but in the fallible eyes of the cognoscenti, he’s just another very good player among many. That he would grab hold of his singular potential when surrounded by clowns and incompetents is a sadly fitting piece of this curious narrative still waiting for its triumphant redemption.