Now that Carmelo Anthony is officially opting out of his contract and, for the first time in his pro career becoming a free agent, the possible destinations for his scoring prowess is narrowing by the day. The Bulls and Rockets appear to be at the front of the pack and while it’s a fun game to wonder where oh where would Melo fit, it’s even more fun to ponder the impossible: historically speaking, what are some of the top mutually beneficial teams for which Melo could’ve played? 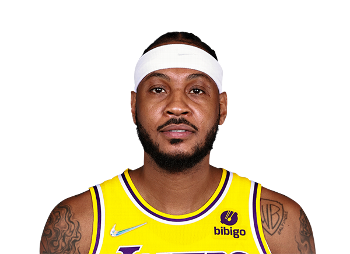 We’re all familiar with the Pistons’ legendary misstep taking Darko Milicic over Melo, Chris Bosh, and Dwyane Wade. Any one of those players would’ve made a great addition to a talented and mature Pistons team that would go on to win the 03-04 title, but a 19-year-old Melo would’ve come in and immediately been the best offensive player on the roster. Whether the Pistons would’ve brought him off the bench behind Tayshaun Prince or started him doesn’t matter, the only man who could’ve stopped him from scoring 20/night would’ve been coach Larry Brown. Just as importantly as his on-court production is that he would’ve been on a rookie deal lasting through at least 2007. From 2004 to 2008, this Melo-less Pistons group made the Eastern Conference finals every season and reached the finals twice. Do they tack on another title with the ultra-talented Melo? Does Melo find winning ways in the pros and create a legacy to match his other 2003 draft counterparts? Thanks to Joe Dumars and the Pistons brass, we’ll never know.

Karl Malone’s best Jazz teams never could overcome MJ’s Bulls. Maybe it was Malone’s clutch woes or just the indomitability of Jordan and Scottie. Whatever the case, let’s re-imagine the methodically pick and rolling Jazz with the 6’8”, 230lbs Melo at small forward in place of 6’7”, 225lbs Bryon Russell. While Russell was absolutely a better defensive player than Melo, comparing their offensive games is like comparing a beautifully crafted club sandwich with Boar’s Head turkey, thick slabs of bacon, a little avocado, a slice of Swiss cheese on gourmet toasted bread to a butter sandwich made out of two dried out heels. Is Melo’s offense enough to extend Pip on defense and give Malone more room to operate? Does the presence of Melo in the pick and roll game add enough variation to an already excellent offense that it breaks the Bulls defense? I don’t know and I have my doubts, but me and Karl Malone and Bob Costas would like to see this.

First thing’s first: There’s no way Golden State could’ve afforded Chris Mullin, Tim Hardaway, Mitch Richmond and Melo, but we’re going all in. The ever-imaginative Warriors Head Coach Don Nelson loved to tinker with a lineup and having a three-point shooting Melo at the four alongside an already potent offensive group would’ve delivered enough options to satisfy Nelson’s always-curious mind. Would Melo have been chewed up and spit out by the Mailman and Charles Barkley? Of course, but can you imagine those same guys attempting to defend Melo as he shoots 40% on threes and attacks slow-footed defenders with an array of moves that rivals the best players in the game. The net gain for adding Melo to Run-TMC is likely minimal, but inasmuch as we love Herm Edwards and his “You play to win the game” attitude, we yearn to be entertained.

For a team that won back-to-back NBA championships and made it to three straight finals and five straight EC finals, it’s hard to ask for more, but if we replace Adrian Dantley or Mark Aguirre with Melo, the offensive gains outweigh the defensive losses. Aguirre and Dantley both made individual sacrifices for team success and without the pressure of being the leader, I like to imagine Melo’s capable of doing the same. Assimilating into a Bad Boy culture of family and hard-nosed loyalty could’ve been the best thing to ever happen to Melo and maybe would’ve lifted Detroit into the stratosphere occupied by Magic’s Lakers, Bird’s Celtics, and Jordan’s Bulls. Also, Melo vs. Dominique, Bird, Pippen, and other 80s stalwart SFs would’ve been a joy to behold.

Everyone remembers MJ’s game-winner over an outstretched and overmatched Craig Ehlo and the Cavs in game five of the 1989 first round, but less people remember this Cavs team was one of the top-three teams in the league that year. With a starting five that featured healthy seasons from Mark Price, Brad Daugherty, and Ron Harper, plus Larry Nance and Mike Sanders, this team was on par with the eventual champion Pistons and Magic’s Lakers group. If we swap out the perennial role player Sanders with the perennial all-star Melo, we have a team of all pros and all-stars too good for MJ to overcome on his own. Melo gives them four players capable of scoring 20+ any night and a group that finished second in the league in defensive rating and third in opponents points/game. Maybe it’s enough to get Cleveland a title and revamp the entire future psyche of a long-fucked fan base. And maybe we’re even talking about Mayor Anthony.

There’s a good chance that you, like me, weren’t alive when the Washington Bullets were one of the league’s most successful franchises in the 1970s. They went to four NBA Finals and won one in 1978 with possibly one of the worst titlist teams of all time (they won 44 games in the regular season). That title team was far from their best. In 1975 the Bullets won 60 games and tied for the best record in the league. They had the best defensive team, the highest margin of victory, and kicked much ass with a front line that included all-stars Elvin Hayes and Wes Unseld. The weakest spot on the roster was at small forward where the blue collar Mike Riordan teamed with Nick Weatherspoon to hold it down with some sense of regularity. These Bullets were destroyed in the finals by the Rick Barry-led Golden State Warriors in a series where Warriors coach Al Attles was ejected in game four for storming the court and fighting with the aforementioned Riordan. Mixing in the 6’8” Melo alongside the Hall of Famers Unseld and Hayes gives the Bullets two of the top players in the league. Chemistry questions will always arise, particularly with high usage guys like Melo, but how he would’ve blended with Hayes, a player whose presence was once compared to “Chinese water torture … it’s just a drop at a time, nothing big, but in the end, he’s driven you crazy,” is the ultimate question.

Were it not for Bill Russell and the Celtics’ dominating run in the 50s and 60s, Wilt Chamberlain would likely have numerous championships and a different reputation among basketball historians. Another team and player that nearly suffocated under the Boston success is the St. Louis Hawks and Bob Pettit who faced the Celtics four times in the finals, lost thrice, and went to game seven twice. The Hawks started 6’4” Hall of Famer Cliff Hagan at the SF slot, but the 1959 version of Hagan is simply outmatched by 2014 Melo and that’s the version we’d transport back in time. Melo’s combination of quickness, strength and legitimate jump shot would be indefensible by 1959 standards. Different challenges such as racism, dirty fouls, and uncomfortable shorts would replace modern obstacles, but for a team that spent five years on the cusp of all-time greatness, Melo would’ve gleefully pushed them over the top and instead of having a Bill Russell NBA Finals MVP, perhaps we’d have the Carmelo Anthony NBA Finals MVP award … chew on that. [Side note: In the 1957-58 finals, the one St. Louis won, Bob Pettit scored 50 points in a series-clinching game six win.]